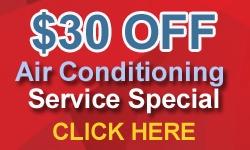 Now that summer is officially here and the weather is in the 90s here in Harford County, Maryland, we’ve gotten a number of cars this week with malfunctioning air conditioning systems.  It’s something you don’t usually realize until it finally gets hot enough to use it, but it’s miserable to suddenly discover that your air conditioning isn’t working right when you need it.

If you recently got into your car and discovered that your air conditioning wasn’t working, here are some possible causes of the problem:

Your cooling fans aren’t turning on.
Cars are equipped with multiple fans and sometimes they stop working properly.  When you press your air conditioning button, it’s the high speed fans in particular that should turn on.  If they are suddenly unable to turn on, then they should be replaced.

You have a refrigerant leak.
One of the most common air conditioning problems that we see is leakage.  To determine where a leak might be in your system, we use a fluorescent dye, which shows up easily when leaked out.  If you have a leak in your air conditioning system, it will need to be sealed and your refrigerant will need to be recharged.  In some cases, it is as simple as replacing a damaged O ring.

Prevention is key.
The best thing you can do is to have your air conditioning system checked annually.  It’s natural to lose some refrigerant over time, just like your tires lose air pressure over time.  Refrigerant is essential to your car, because it lubricates your entire AC system.  Without that lubrication, you risk having your compressor lock up.

At Ward Automotive in Bel Air, we can take a thorough look at your AC system to make sure everything is in good condition.  We are proud to service all of the towns in Harford County, including Aberdeen, Bel Air, Burns Corner, Darlington, Edgewood, Fallston, Havre de Grace, Hickory Hills, Jarrettsville, Joppatowne, Perryman, Pleasant Hills, Pylesville, and Riverside.  At Bel Air Autobody and Ward Automotive, we are the one-stop shop for all of your auto repair needs.